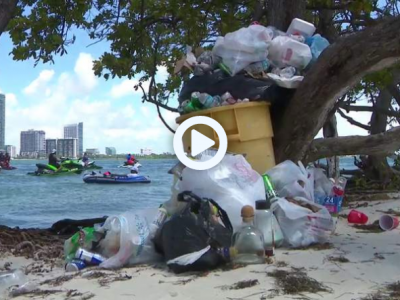 It’s bright and early on Memorial Day, one of the busiest boating days of the year, and Biscayne Bay is getting packed.

Not just with water enthusiasts, but with the litter they leave behind.

“There’s lots of people coming out here. But the island is so small and it can’t sustain the amount of trash that people are bringing,” says Dara Schoenwald.

Schoenwald and her husband Dave Doebler co-founded VolunteerCleanup.org. For six years they have been documenting this growing crisis on the bay’s spoil islands, a frequent haunt for boaters and jet skiers and a magnet for garbage.

By 10 a.m. on Memorial Day, Willis Island at the mouth of the Miami Marine Stadium basin is already trashed. Trash cans are overflowing and forming piles of garbage destined to wind up in the bay.