The Most Important Cleanup of the Year 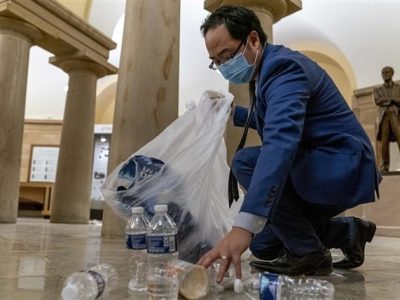 In the aftermath of the violent mob that stormed the Capitol on January 6th, a single Congressman from New Jersey spontaneously conducted what we are calling the most important cleanup of the year, although it was far from any beach.

Congressman Andy Kim from NJ’s 3rd Congressional District had just finished voting after Congress regrouped following the attempted insurrection. Walking the devastated Capitol Building afterwards, the Congressman did what so many Surfrider Foundation volunteers do all the time; he grabbed a trash bag and started cleaning up.

Congressman Kim received recognition for this on CNN and participated in numerous interviews on the subject. He humbly claimed it was an ordinary act but that “his heart was broken” to see the building that is such an iconic symbol of our democracy so trashed and so disrespected.