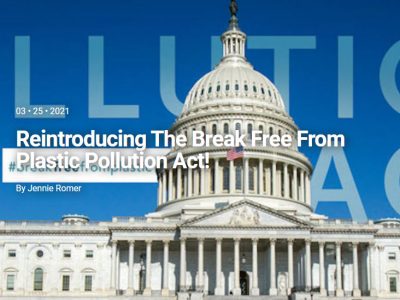 the federal Break Free From Plastic Pollution Act (BFFPPA) was reintroduced (S. 984) by Sen. Jeff Merkley (D-OR) and Rep. Alan Lowenthal (D-CA). The Surfrider Foundation has been involved with BFFPPA since its inception and we have been working closely on this reintroduction. The priorities that Surfrider focused on for the reintroduced bill included pushing for incentivizing reuse / refill models, strengthening the definition of reusable bag, addressing toxics more broadly, and closing the loophole for plastic waste exports. We’re happy to report that each of these priorities were addressed in the reintroduced bill.

The reintroduced BFFPPA builds upon momentum from the bill that was introduced last session in February 2020. This session’s bill is off to a strong start with 86 original co-sponsors in the House and 11 original co-sponsors in the Senate, which is even more than the bill garnered at the end of last session. As a sign of the bill’s growing popularity, it was even featured recently on a Last Week Tonight with John Oliver episode about plastic.